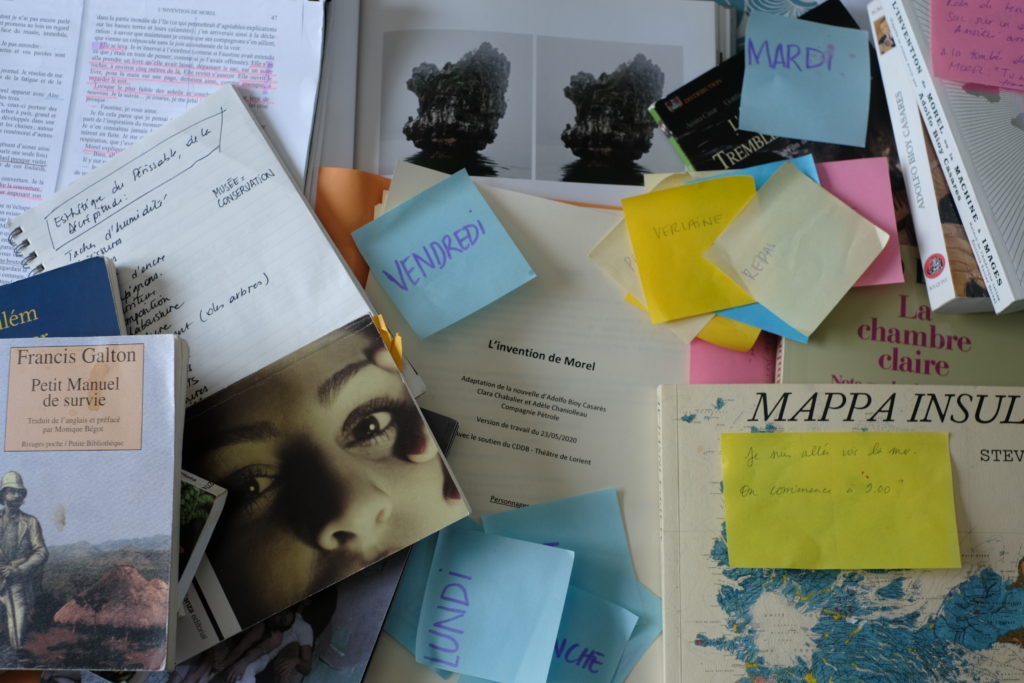 A transmedia project
inspired by « the invention of morel », by adolfo bioy casares
developped in the frame of open access

“The Defense beyond Survivors” proposes the audience to follow the writing process of « The Invention of Morel »’s narrator : fascinated by Neo-malthusian theories of overpopulation, he wants to gather the arguments that would defend our generation in the court of the following ones. And if he had to take into account not only the living ones, but also the pictures we create and that haunt us – ghosts of technology?

The Invention of Morel

The Invention of Morel is a novel written by Argentine author Adolfo Bioy Casarès in 1940.

A fugitive hides on a deserted island. Tourists arrive, and his fear of being discovered becomes a mixed emotion when he falls in love with one of them.  The fugitive decides to approach her, but an anomalous phenomenon keeps them apart : she does not react to him. He assumes she is ignoring him; however, his encounters with the other tourists have the same result. Nobody on the island notices him.

He comes up with all sorts of theories about what is happening on the island, but finds out the truth when Morel tells the tourists he has been recording their actions of the past week with a machine of his invention, which is capable of reproducing reality. He claims the recording will capture their souls, and through looping they will relive that week forever.

On the diary’s final entry the fugitive describes how he is waiting for his soul to pass onto the recording while dying. He asks a favor of the man who will invent a machine capable of merging souls based on Morel’s invention.

Technological and digital changes are profoundly changing our daily lives and the use we make of them. Both artists and institutions are affected in their working methods and the processes of creating and producing works. These issues, re-balanced in the context of the current health crisis, change the links with the public. Having a collective and collaborative logic, creating a new shared history, interdisciplinarity and participation of the audience is embedded in the matrix of the projects that has a result the creation of eight artistic prototypes.

In March 2019, eight European artists were selected to follow a journey of exploration and experimentation comprising four laboratories, a residence and three public presentations of the prototypes of their artistic projects.

The experimental process chosen was to integrate transmedia creation in the various disciplines of the performing arts. Transmedia allows artists to tell a story using everything that makes up our daily lives through different media. Each media used develops its own and different content, not just a duplication but rather an enrichment of the story, to offer a global experience to the public through the multiplicity implicit in its development. It thus becomes a « playing field » for artists in the « living arts », contributing to the development of new aesthetics, but also so that the public that can experiment, play a role, contribute, choose and also tell stories.

We hope that this form of cooperation and new methods of production and sharing can raise questions about the social challenges we face and possible future paths.

For 26 months, the OPEN ACCESS project revolves around laboratories, festivals and seminars, organized in the four European countries of the partner entities. These artists were supported throughout this journey by the transmedia mentors Karleen Groupierre and Anaïs Guilet, in the creative development by Simon Coates and John Hunter, in the collective intelligence by Marie-Julie Catoir-Brisson, in addition to several professionals from the creative and research sectors.

In the frame of Temps d’Images Festival

The Lab #1 organised by Colectiv A based in Cluj takes place in Bucarest in partnership with CINETIc – INTERNATIONAL CENTER FOR RESEARCH AND EDUCATION IN INNOVATIVE CREATIVE TECHNOLOGIES and several other associated partners.

What story would be to tell? And how do we to tell a story that is both expanded, extended in time and located or dispersed in geographical space (the European space), and across multiple artistic disciplines and media and / or digital platforms?

DuplaCena does not have its own space and the Festival Temps d’Images Lisboa is a highlight that unfolds in different places in Lisbon over several weeks. This theme and the explorations carried out on the spot will thus make it possible to work on a stronger connection between these spaces and to add the audience and virtual space.

In this lab, we explore the coexistence of several spaces, particularly within a transmedia live performance work. Indeed, such a work can be deployed in several spaces simultaneously and consecutively. So how can we play with these « remote stages » through a narrative?

What are their qualities and characteristics (we can then question the notion of spaces, places, territories, geography, non-places)? And how can we link the audiences of these different spaces? In this sense, it will be necessary to question the spatial organization of the stage and the room, the public space, the space of the action and the space of listening and gaze. Moreover, if telepresence is relatively recent and related to the explosion of the Internet, this question might also test geolocalisation technologies, virtual reality and the internet but also precursory remote presence processes such as the phone or radio.

The Lab #3 organised by National Theatre Wales should have taken place in Cardiff as part of the Festival Experimentica in partnership with Chapter Arts Center and other associated partners. But because of the sanitary crisis, the lab went virtual.

In this lab, we have deepened the interaction of artistic disciplines and other disciplines, such as the social sciences and humanities. How can they combine in a transmedia work?
How is the relationship with theater audiences developed in a form with dance extensions, installations and so on?
Since artists come from a variety of disciplines, it is interesting to observe the exchanges and transfers of skills that take place within the group and how they echo scientific disciplines.
It will also be an opportunity to explore the pop and fan culture which is part of transmedia’s DNA and to understand how to build audience inclusion and interest, create a community of fans. The fan culture summons various processes such as Paul Booth specifies in his book Digital Fandom: the creative fan who can be found in blogs (eg fan fiction); the gift economy, an economy of reward and gift for the fans, which promotes social relations in a digital world and amounts to connecting the production and consumption of media content on an equal level; and, new forms of identities and expressions, for example when fans reclaim characters by creating fictitious profiles on various social networks but which can also be realized from a performative point of view (in real life situations).

The Lab #3 organised by Le Granit Scène nationale de Belfort (MA avec Granit) should have taken place in Belfort and Montbéliard in partnership with several associated partners, such as the Laboratoire ELLIADD and the IUT Belfort – Montbéliard / MMI Departement from the University Franche-Comté, the UTBM – University of Technology of Belfort Montbéliard, VIADANSE and others. But because of the sanitary crisis, the lab went virtual.

This lab, under the sign of the deepening, gives the participants the possibility to « dig » deeper into the first themes and the work of the last three laboratories by using various practices and technological processes. It will also be a question of preparing the residency time and the festivals that will follow.
That means also to face the question of the audience more frontally, in particular by questioning the relationship through design-thinking, until now always present in filigree. This method intends to ask the question of the audience (or user) at the time of the development of the object without ever losing sight to whom it addresses throughout the manufacture.

In each city where the prototype is presented, Clara Chabalier overlays stereoscopies from the beginning of the 20th and 3D photos from the same places.

Stereoscopy is a photographic process that allows 3D view, by taking 2 photographs 6 cm away from each other (the space between the eyes).

The same lenses are used in ancient stereoscopic helmet, in vogue at the beginning of 20th century, and nowadays VR helmets.

This prototype is shown in Belfort, but this is a message that can make you imagine the process.

Message to the Survivors

Watch the video presentation in 2D on any device

You can have a chat with Adolfo, the narrator of The Invention of Morel. This human/machine dialogue handles the narrator’s project of book : writing a Defense Beyond Survivors, that would defend our generations before the future generation’s court.

Fed with conversations Clara Chabalier had with different researchers, the chatbot starts from the anxiety of an overpopulated Earth, and drifts  till the overproduction of pictures, of sounds, of videos, that make us in constant link with people that don’t exist anymore – that create « ghosts », regarding Jacques Derrida.

The chatbot is still in an experimental version, your conversations will help us to create more interactions and to smoother the experience.

3 key-words might help you if you are stucked : Villings, Malthus and Ghost.

We ‘d be glad to read your feedbacks and sensations, you can send them at defensebeyondsurvivors@gmail.com

And the collaboration of :

Camille Alloing, Professor at Social and Public Communication Department of University of Quebec in Montreal (UQAM), autor of several books about e-reputation

Charlotte Debest, Doctorate in sociology, author of “The choice of a Life without child”.

Clara Chabalier will set up the theatrical adaptation of The Invention of Morel in 2022-2023. The performance will be untitled : The Defense Beyond Survivors.